Adrian Newey design Leyton House 1990 F1 car delivered to the RAC Club, Pall Mall, London at 5am. The car was on display for a week alongside a Red Bull RB6 (also designed by Newey) for a special event. A special 'skate' had to be built to get the car in as it is 2.15m wide so considerably wider than the Red Bull at 1.8m. 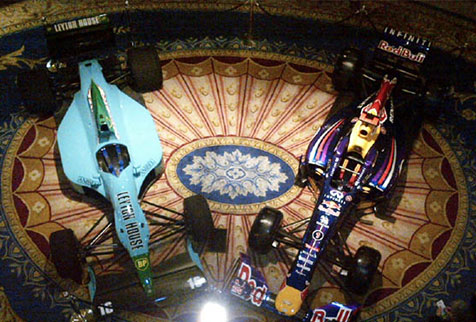 Leyton House
The Leyton House CG901 was a Formula One racing car designed by Adrian Newey for the 1990 Formula One World Championship. Five chassis were built and were powered by the Judd EV 3.5 litre V8 engine. Chassis 001 was subsequently modified mid-season to accommodate the Ilmor 2175A engine the team used in 1991. The drivers for 1990 were the highly rated Ivan Capelli and Maurício Gugelmin.